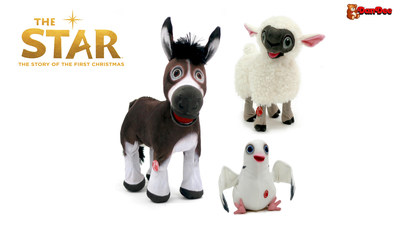 Led by an all-star voice cast, Sony Pictures Animation's The Star, is about a small but brave donkey named Bo who yearns for a life beyond his daily grind at the village mill. One day he finds the courage to break free, and finally goes on the adventure of his dreams. On his journey, he teams up with Ruth, a lovable sheep who has lost her flock and Dave, a dove with lofty aspirations. Along with three wisecracking camels and some eccentric stable animals, Bo and his new friends follow the Star and become unlikely heroes in the greatest story ever told – the first Christmas.

Inspired by the film, a range of products is now available for purchase and sold exclusively at Walmart and Walmart.com. The Star holiday program features an assortment of plush, stockings, ornaments, décor, melamine sets, figures, nativity sets, wooden blocks and slippers. The program is supported with a marketing campaign led by Sony Pictures Entertainment which includes a TV spot highlighting the product at Walmart.

Dandee International, a leader in the seasonal category is the official supplier of the program.  Additionally, Simon & Schuster Children's Books and Phoenix International Publications, Inc. will be releasing a range of children's books in a variety of formats based on the film and available wherever books are sold.

Sony Pictures Animation produces a variety of animated and family entertainment for audiences around the world.  Next up for the studio is the inspirational The Star in November 2017; Hotel Transylvania 3 in July 2018; and an animated Spider-Man feature from the minds of directors Chris Miller and Phil Lord in December 2018.  Sony Pictures Animation is a division of the Sony Pictures Motion Pictures Group.