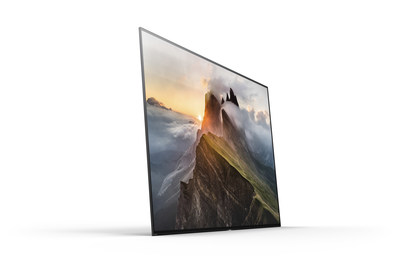 Sony's booth this year will showcase the company's latest offerings and initiatives, centering primarily on products that, with HDR (High Dynamic Range) technology, significantly raise the bar on picture quality. Attendees to the booth will be able to go hands-on with Sony's wide range of products, from home entertainment offerings like 4K HDR TVs and audio equipment that produces detailed, three-dimensional acoustics, to cameras, projectors, and gaming consoles, all of which are designed to expand the ways people can enjoy the entertainment content they care about, and be moved emotionally.

At the Sony press conference held on Wednesday, January 4, Sony Corporation President and CEO Kazuo Hirai took the stage and introduced the audience to the ever expanding world of HDR-enabled products and content, beginning with the unveiling of the A1E series, Sony's first ever line of 4K BRAVIA® OLED TVs. He then touched on Sony's wide array of products that enrich customers' everyday lives and inspire and fulfill their curiosity, as well as the company's initiatives aimed at expanding the possibilities of the consumer electronics realm.

A video of the press conference can be streamed at the following URL:
www.sony.com/ces

Home Entertainment & Sound
Sony has been a driving force in the popularization of HDR, incorporating the technology into its visual and audio products, as well as its content, in order to provide customers with more true to life viewing experiences.

The new A1E series of BRAVIA OLED brings together the best of Sony's unique picture quality technology, including the 4K HDR processor X1™ Extreme featured in Sony's flagship Z9D series. X1 Extreme, which accentuates the visual appeal of 4K HDR content, is capable of drawing out the full potential of self-emitting OLED panels, producing deep blacks and brights that more faithfully capture real world visuals. The A1E series is also equipped with Sony's unique Acoustic SurfaceTM technology that vibrates the display and enables sound to be output directly from the TV screen. By eliminating the speakers ordinarily placed around the periphery of the screen, this series achieves a speaker-less and stand-less form factor. Because sound is emitted from the screen, the picture and sound become as one, heightening the reality of the visuals before you. Moreover, you can enjoy an ideal viewing experience from anywhere in your living room, thanks to the combination of the OLED panel, with its wide viewing angle, and the Acoustic Surface technology which fuses together image and sound.

The BRAVIA X93E series of 4K HDR TV is equipped with Sony's unique and advanced Slim Backlight Drive+(plus) technology, taking brightness and contrast to even greater heights. Moreover, the 4K HDR processor X1 Extreme features HDR remaster for upscaling standard dynamic range (SDR) content to near 4K HDR quality, as well as a host of other technologies for boosting picture quality for a wide range of content. With X1 Extreme, the X93E series realizes 4K HDR levels of visual expression with high picture clarity, high contrast, and a wide color. This new BRAVIA TV, when hung against a wall, virtually disappears into it thanks to their stylish form factor, leaving behind nothing but the picture itself.

The Sony booth at CES will feature a display corner highlighting the spread of devices capable of 4K HDR playback. At this corner, visitors can catch a glimpse of visuals from "Uncharted 4: A Thief's End," "Gran Turismo Sport," and "Horizon Zero Dawn," 4K HDR compatible PlayStation®4 (PS4™) games, played on BRAVIA. The corner will also showcase Sony's new UBP-X800 4K Ultra HD Blu-ray™ player and its immersive, high quality 4K HDR visuals. The player supports Hi-Res technology and is capable of playing detailed, nuanced audio that is true to the originally recorded sound.

In the realm of audio equipment, Sony announced a range of new products equipped with cutting-edge technology to enable you to more fully enjoy the impact of 4K HDR. Among these is Sony's new flagship sound bar, the HT-ST5000. This sound bar supports not only Hi-Res, but also the Dolby Atmos® next-generation 3D surround sound format that takes immersion to the next level. It also features the unique wave-front control technology of Sony's S-Force PRO Front Surround, which channels sound waves in just the right direction to realize powerful room-filling audio. Additionally, sound professionals at Sony Pictures Entertainment lent their expertise to the HT-ST5000, helping to calibrate audio quality and optimize it for the playback of movies. The new STR-DN1080 multi-channel integrated amplifier is compatible with DTS:X™, in addition to Hi-Res and Dolby Atmos, generating sound that moves about freely in three dimensions. The amplifier is equipped with other technologies as well for creating a uniquely Sony acoustic space, including Speaker Relocation, which realizes an optimal acoustic environment even in the limited installation conditions of the home, and Phantom Sound Back, which generates rich surround sound that spreads to every corner of the room.

In addition to the above, Sony will show off the pairing of its Wi-Fi compatible audio products*1 and Android TV-powered Sony 4K HDR TVs that are compatible with Google Home powered by the Google Assistant. With a simple voice command, you can easily stream music through connected audio devices across multiple rooms, or access YouTube TM and music services on your TV. This voice control functionality will be on full display at the Sony booth. Finally, Sony will be exhibiting two types of noise canceling wireless headphone prototypes in development which aim to provide you with more freedom in listening to music at high audio quality: one with a cable-free design featuring separate left and right units, and one with a neckband-style design.

Imaging Products & Solutions
In the imaging realm, Sony has been working to provide the entire range of technologies and solutions end-to-end, from light source, lens, and image sensor to image processing, IP transmission and display. The booth this year will primarily showcase Sony's consumer imaging products.

The new VPL-VZ1000ES*2 Ultra-Short Throw laser light projector announced at CES 2017 boasts a space-saving design that can comfortably fit into a living room, making it easy to enjoy immersive 4K HDR picture on a big screen. Featuring an ultra₋short throw lens, the VPL-VZ1000ES can project from as close as 6 inches*3 away from the screen surface, so you don't have to worry about any obstructing silhouettes.

Finally, in the field of large scale display systems, Sony will exhibit its scalable display system constructed from display units made with the unique CLEDIS™ high picture quality display technology that uses ultrafine LEDs as the light source. This system will be exhibited as an approximately 32' (horizontal) x 9' (vertical) large scale display, reproducing rich color tones as well as smooth moving and still images, delivering visuals the likes of which are not possible with existing displays.

*2: Model to be sold in the US market. Model name differs by region sold.
*3: Distance from the edge of the projector body to the screen surface, assuming a 100" (16:9) screen.

Game & Networks
PlayStation®VR is a virtual reality (VR) system that takes PS4™ to the next level of immersion and enriches the gaming experience. Visitors to the Sony booth will be able to enjoy a real driving simulator in VR with "Gran Turismo Sport" using PlayStation®VR, as well as a VR space adventure with "Farpoint," utilizing the PlayStation®VR Aim Controller to take down enemies.

Life Space UX
The Life Space UX concept is defined by delivering unique experiences and facilitating new ways to transform your living space. In this category, Sony will display for the first time a concept model called "New 4K Projector -It's all here-" which proposes new encounters with various content such as books, films and music. Naturally, you can use it as a conventional projector, creating a big screen in your home by projecting images onto an adjacent wall, in order to view content. But the concept behind "-It's all here-" is all about the joy of discovering new content. For instance, you could use it to project a vast amount of book covers onto the wall, pick one that piques your interest, and turn the pages to leaf through it. Additionally, the already released 4K Ultra Short Throw Projector, LED Bulb Speaker, Portable Ultra Short Throw Projector, and Glass Sound Speaker will be exhibited at the booth. Through Life Space UX, Sony will propose new value and new experiences made possible in your living space.

Finally, the Sony booth will showcase the various initiatives Sony is undertaking to expand the possibilities of the consumer electronics realm. Among these are "N" and "T," concept prototypes from the Future Lab Program™ research and development initiative which aims to co-create future lifestyles with users; the diverse products born out of the start-up projects from Sony's internal new business incubation initiative, the Seed Acceleration Program; Xperia™ Smart Products, which propose new ways of communicating; and the autonomous drones and cloud-based data processing services for measurement and inspection that are offered by the Sony Group affiliate company Aerosense Inc.