NEW YORK, Jan. 9, 2017 /PRNewswire/ -- Sony Classical is delighted to announce a key new recording event: a brand-new album performed by stellar musicians of the day that showcases some of Hollywood's greatest ever movie themes, written by one of the world's most innovative musical talents and leading film composer of our time – Hans Zimmer. The new album, Hans Zimmer – The Classics is available January 13, 2017 on Sony Classical. 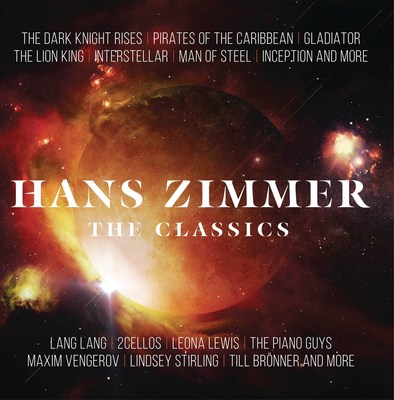 This eagerly-anticipated album showcases Zimmer's musical versatility and absolute mastery of the genre, showcasing key themes from such magnificent scores as The Dark Knight Rises; Interstellar; Pirates of the Caribbean; Gladiator; Man of Steel; The Lion King; Inception and many more, all in stunning new arrangements.

A mighty collection of classics from one of the most in-demand composers in Hollywood, this brand-new album is a must-have for Zimmer's legions of fans around the world and Zimmer - a pioneer in the use of new technology - shows himself to be a master in integrating the electronic musical world with traditional orchestral arrangements.

Hans Zimmer has scored more than 120 films, which have collectively grossed over 24 billion dollars at the worldwide box office. His Academy award-winning score to The Lion King has sold over 15 million copies since release in the early 90s. He has been honored with an Academy Award, two Golden Globes, four Grammys and many more awards and nominations including the prestigious Lifetime Achievement Award in Film Composition from the National Board of Review and ASCAP's Henry Mancini Award for Lifetime Achievement plus and a Classic BRIT Award for Outstanding Contribution to Music. Spring 2016 saw his first-ever European tour featuring his band, orchestra, choir and soloists.