'WE ARE X' WILL OFFICIALLY OPEN IN THEATERS ACROSS THE U.K. IN MARCH

NEW YORK, Jan. 26, 2017 /PRNewswire/ -- The soundtrack for the film WE ARE X--the critically acclaimed music documentary about X JAPAN--will be released worldwide on March 3, 2017 via Sony Music's Legacy Recordings (a division of Sony Music Entertainment) and is available for preorder now at Amazon (here). 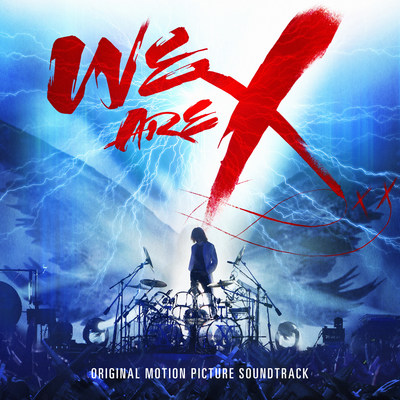 Hailed as "fascinating" by the New York Times, WE ARE X is a transcendent and beautifully shot rock & roll story about the most successful rock band in Japanese history, X JAPAN. They've sold over 30 million albums, singles and videos combined; sold out Japan's 55,000-seat Tokyo Dome a record 18 times; and played to tens of thousands of fans outside of Japan. Under the enigmatic direction of YOSHIKI--composer, classically-trained pianist, drummer and the creative force behind the group--X JAPAN has captivated a wide range of admirers as Sir George Martin, KISS, Marilyn Manson, Wes Borland, Stan Lee, and the Japanese Emperor-while pioneering a spectacle-driven style of rock music called "Visual Kei" (visual-kay), a one-of-a-kind cultural phenomenon.

In late 2016, 'WE ARE X' was released to theatres across America after winning multiple awards at the Sundance and SXSW Film Festivals. Directed by acclaimed documentarian Stephen Kijak (Stones in Exile, Scott Walker: 30 Century Man), and produced by the Oscar-winning production team behind Searching for Sugar Man, WE ARE X is an astonishingly intimate portrait of a deeply haunted--but truly unstoppable--virtuoso and the music that has enthralled legions of the world's most devoted fans.

X JAPAN--YOSHIKI/drums, piano; TOSHI/vocals; PATA/guitar; HEATH/bass; and SUGIZO/guitar, violin--will perform their first major show of 2017 on #XDAY, Saturday, March 4 at SSE Arena, Wembley in London U.K, tickets (here).  Later in March, WE ARE X (film) will premiere in London and officially open in theaters across the U.K. The film continues to expand internationally in new cities every week; and will arrive on Blu-Ray™, DVD and Digital HD on April 25 from Magnolia Home Entertainment under the Magnet label. Territories include U.S, Bermuda and Bahamas. Critical praise for the film 'WE ARE X' continues to pour in: NEW YORK TIMES, LOS ANGELES TIMES, PITCHFORK, BUZZFEED, USA TODAY, YAHOO and LA WEEKLY.

YOSHIKI describes the song "LA VENUS" and its role in the film WE ARE X (here).