Legacy Recordings to Release Cover Stories: Brandi Carlile Celebrates 10 Years of The Story - An Album to Benefit War Child on May 5

Carlile recruits artists and activists across generations - including Adele, Kris Kristofferson, Dolly Parton, Pearl Jam and many more - to create interpretations of songs from groundbreaking 2007 album

An Acoustic Evening with Brandi Carlile Performing The Story in Its Entirety and More Set to Kick Off April 21 in Birmingham, AL

"As an artist, Brandi Carlile is using her talent on behalf of the most vulnerable among us, children living in areas of conflict. She reminds us that, together, we can build for our children a more just, peaceful world."- Barack Obama

NEW YORK, Feb. 21, 2017 /PRNewswire/ -- On May 5, Legacy Recordings (a division of Sony Music Entertainment) will release Cover Stories: Brandi Carlile Celebrates 10 Years of The Story – An Album to Benefit War Child. This historic collection features newly recorded versions of all fourteen songs from Carlile's breakthrough T Bone Burnett-produced 2007 album The Story, which just last month was certified Gold by the RIAA. Adele, The Avett Brothers, Kris Kristofferson, Dolly Parton, Pearl Jam, and Margo Price are among the artists and activists lending their voices to celebrate the album's 10th anniversary, and Barack Obama will provide a foreword. All proceeds from the album will benefit War Child UK, an organization dedicated to supporting children affected by conflict. Carlile's nonprofit, the Looking Out Foundation, launched the Story Campaign last year to raise awareness and funds for War Child UK. 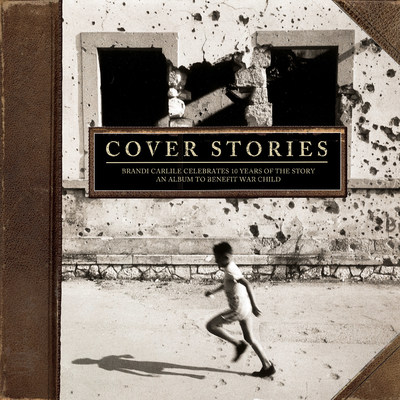 Cover Stories is being offered in 1CD, 2LP and digital configurations and is available for pre-order now via the following:

"This is a David and Goliath story," says Carlile. "Since becoming a mother, the reality of a child's beautiful life being torn apart by war felt like too big of a problem for me. So I asked my heroes and friends to help me launch a rock at the giant that is our refugee crisis and help in the only way we know how, through the power of music." She adds, "It's not how hard you can throw, it's how high you're willing to aim."

Cover Stories was recorded mostly over a series of sessions in 2016 (with the exception of Adele's take on "Hiding My Heart" which was originally released as a bonus track to her 2011 album 21, and Ruby Amanfu's "Shadow on the Wall," originally released in 2015), with many special guests contributing to the already star-studded lineup. Chris Stapleton adds guitar to Kris Kristofferson's take on "Turpentine," and Miranda Lambert lends backing vocals to Anderson East's "Josephine." Dave Cobb produced tracks by Kristofferson, Parton, and Price; Patrick Carney of the Black Keys produced Ruby Amanfu; Carlile and longtime bandmates The Twins (Tim and Phil Hanseroth) produced the Secret Sisters and TORRES.

Carlile and The Twins have confirmed a run of special tour dates to celebrate the release of Cover Stories called An Acoustic Evening with Brandi Carlile Performing The Story in Its Entirety and More. The nine-date run kicks off April 21 and shows in Birmingham, Athens, Austin + Los Angeles are already sold out. See below for a full list of dates.

Reflecting on The Story's 10th anniversary Carlile says, "This album defined our band and welded The Twins and me to one another forever. It's been a transformative experience to revisit it 10 years later and watch it become something bigger than me. To hear the songs through the voices of my heroes is both surreal and humbling."

Catherine Carlile, Executive Director of the Looking Out Foundation, emphasizes the importance of artists using their platform to amplify the voices of children in war. "When powerful artists come together and lend their voices to a cause, they deliver an indelible message. Today's headlines will soon be yesterday's news, but music endures and transcends and the story lives on."

Rob Williams, CEO of War Child UK says, "War Child has a strong and enduring story of harnessing the power of music to support children forced to live with the brutality of war. This fantastic album will help fund our vital work - from supporting Syrian children to access education, to reintegrating child soldiers in the Central African Republic and working in juvenile justice in Afghanistan."

For more information on Cover Stories go to:  www.coverstoriesalbum.com

For The Story Campaign:
Catherine Carlile, Executive Director of the Looking Out Foundation
206-747-5743; Catherine@lookingoutfoundation.org

About Looking Out Foundation
The Looking Out Foundation amplifies the impact of music by empowering those without a voice. From neighborhood to nation, we help fund causes and organizations that often go unnoticed. Founded in 2008 by Grammy-nominated artists Brandi Carlile, Tim and Phil Hanseroth, we band together with fans, nonprofits, and corporations to translate voices of song to voices of action. $1 from every concert ticket sold goes directly toward our efforts to support the diverse demographic we serve. Together, we're making music mean more. For more information on how to volunteer, donate or advocate visit lookingoutfoundation.org.

About War Child UK
War Child is striving for a world where children's lives are no longer torn apart by war. We are the only specialist charity for children in conflict, delivering high-impact programmes that are rebuilding lives across Syria, Afghanistan, Iraq, Jordan, Uganda, the Democratic Republic of Congo (DRC), and Central African Republic. We aim to reach children early in the conflict cycle and stay to support them through their recovery, providing education and protection services and also building longer-term livelihood opportunities. We believe that children and young people know what matters to them and that their voices and demands should be heard – we work with them to build their confidence as advocates and to mobilise others to take action in support of them. For more information, visit warchild.org.uk.