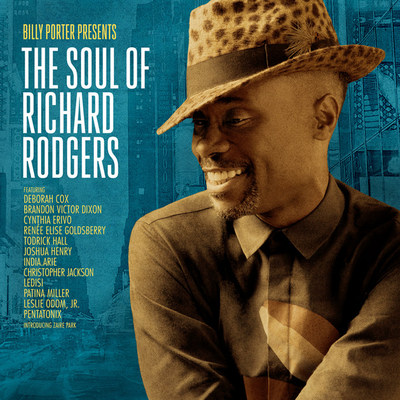 The complete track listing for Billy Porter Presents The Soul of Richard Rodgers is as follows:

"I like to think of this as the Richard Rodgers version of the Hamilton Mixtapes," Porter said.  "These are classic songs that everybody knows and loves, and I'm so excited for people to hear them in a brand new way."

In March, Porter launches a national tour that kicks off in Bayside, NY on March 19. Full tour schedule below.

BILLY PORTER is a Tony® and Grammy® Award-winning singer, composer, actor, playwright and director from Pittsburgh, PA. As a recording artist, Porter's solo albums include his first CD, Untitled, on A&M records, At the Corner of Broadway + Soul – LIVE on Sh-K-Boom Records, and Billy's Back on Broadway, on Concord Records. He originated the role of 'Lola' in the Broadway hit Kinky Boots, which won him 2013 Tony, Grammy, Drama Desk and Outer Critics Circle Awards. Other theatre: Shuffle Along, Miss Saigon, Five Guys..., Grease, Smokey Joe's..., Dreamgirls, Angels in America, The Merchant of Venice, Radiant Baby, Birdie Blue, Songs for a New World, Ghetto Superstar (one-man show), Topdog/Underdog, King Lear. His play, While I Yet Live, premiered in 2015 at Primary Stages. As a director, his credits include Topdog/Underdog and The Colored Museum (both for Huntington Theatre Company); Film/TV: "Law & Order: SVU," "So You Think You Can Dance" (as a guest judge), "The Broken Hearts Club," "Shake Rattle & Roll," "The Big C," The Humbling, starring Al Pacino, Baz Luhrmann's The Get Down. Porter's concerts credits include opening act for Rosie O'Donnell and Aretha Franklin, Carnegie Hall, John McDaniel and the St. Louis Symphony Orchestra, as well as The Buffalo Philharmonic, Peter Nero and The Philly Pops, soloist for President Bill Clinton and various benefits throughout the United States.

SONY MUSIC MASTERWORKS comprises the imprints Sony Classical, Masterworks, OKeh, Portrait, Flying Buddha and Masterworks Broadway. Our artists range from icons to newly developing talents in classical, crossover and adult music, plus new and legendary jazz artists, as well as a vast catalog of musical theatre recordings including classic Broadway shows and original cast albums of today's Broadway hits, most recently Kinky Boots, Once, If/Then and An American In Paris.