NEW YORK, March 10, 2017 /PRNewswire/ -- A legend already and still in her teens, singer Jackie Evancho seizes a pivotal moment in her career to reveal a fresh side to her art with the release of  Two Hearts , a joint venture with Portrait/Sony Music Masterworks. The beautiful soprano also has a passion for pop and an emerging gift for songwriting. Two Hearts features the classical crossover songs and enduring favorites that are her signature sound, along with a bonus disc of five songs that explore the newly discovered pop side of her voice, four of which she co-wrote. The album will be released March 31, 2017, and is available for preorder now. Evancho makes her Café Carlyle debut in New York City from April 11-22 in support of the new album Two Hearts. 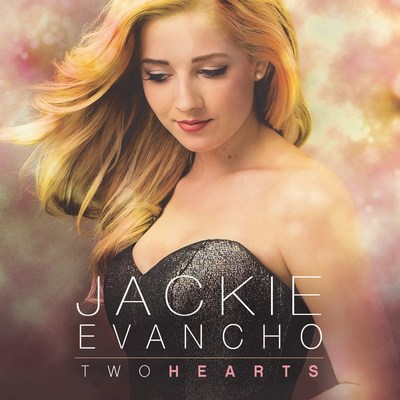 Fresh from Evancho's spotlight performance of the National Anthem at January's Presidential inauguration, Two Hearts reveals to the world a young artist on a journey of discovery. The world knows Evancho as a platinum-selling, history-making teen vocal sensation. Her six previous albums have entered the Billboard Classical chart at No. 1. Her fans love her crystalline soprano voice, and it is the heart of her art. With her new album, Evancho explores her own creative evolution, a new joy in singing and in writing songs.

The classic Evancho sound opens Two Hearts in the inimitable Lucio Dalla ballad "Caruso," first recorded by the great tenor Luciano Pavarotti. The sound echoes in the lovely "Attesa," arranged from the instrumental Intermezzo in Mascagni's opera Cavalleria rusticana and "How Great Thou Art," the soaring anthem of faith that was a favorite of Elvis Presley's.

Great singers have inspired Jackie Evancho, and on Two Hearts she brings her gifts to three very different songs identified by singers she admires – the Oscar-nominated "May It Be," written for Enya to sing on the soundtrack of The Lord of the Rings: The Fellowship of the Ring; the Oscar-winning "The Way We Were," which Barbra Streisand (with whom Evancho has recorded) made famous in the film of the same name and Taylor Swift's "Safe and Sound." Also included are Sam Smith's "Writing's on the Wall" and a live recording of Christina Perri's "A Thousand Years," as a duet with the emerging crossover tenor Fernando Varela.

The Two Hearts disc two includes five songs, four of which are brand-new pop creations in which Evancho was a collaborating writer – "Sane," "Pedestal," "The Haunting" and "Wonderland." The fifth is "Apocalypse" – released as a single in 2016 – in which the singer began to explore her affinity for a straight-up pop sound.

Since she first dazzled American television audiences at the age of 10 – gaining global recognition with her stunning debut on NBC's America's Got Talent – Jackie Evancho has released a string of platinum and gold albums, with sales of over 2.5 million in the US.

Along the way, Evancho has also made history – the youngest solo platinum artist … the youngest Top 5 debut artist ever in the U.K. … the youngest person to give solo concert at Lincoln Center … the highest-ranking debut artist of 2010. All six of her albums have hit No. 1 on the Billboard Classical chart. The magnitude of her success led Billboard twice (in 2010 and 2012) to include the singer on its list of "music movers-and-shakers under the age of 21."

In only seven years as a professional singer, Evancho has an astounding record of achievements. She has sung for Presidents Donald Trump and Barack Obama, Pope Francis I, the Japanese royal family and Oprah Winfrey's farewell telecast. She represented the US in Russia at the opening concert of the St. Petersburg Economic Forum. In addition to her seven albums, she has toured the world, made a guest appearance with Cirque de Soleil in Las Vegas, modeled clothes for GUESS and was cast by Robert Redford to play his daughter in the 2013 film The Company You Keep.

Renewing the sound that made Jackie Evancho a household name, Two Hearts signals another chapter in her growth, creatively and personally – a new dimension in her work and inspiration, from one heart so full and passionate that it seems like two.