NEW YORK, April 7, 2017 /PRNewswire/ -- "This album feels like the most important creative outpouring of my life so far," says songwriter Allison Pierce, who is launching the second half of her distinguished career by teaming with producer Ethan Johns (Ryan Adams, Ray LaMontagne, Paul McCartney).   "It feels like the most genuine expression of who I am, musically and personally." 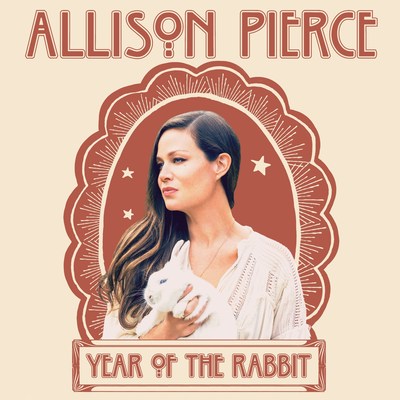 Year of the Rabbit (May 5, Sony Music Masterworks) marks Allison Pierce's first album as a solo artist, following two decades with her sister in the acclaimed duo, The Pierces.   Recorded in analog straight to magnetic tape, the album was mostly performed by Allison and Ethan at Hollywood recording mecca Sunset Sound (much in the same spirit as Johns produced Ray LaMontagne's debut LP, Trouble).  The only outside contributors were Gabe Witcher, who supplied fiddle on two tracks, and Greg Leisz, who played pedal steel on another.

"Over the years, I'd write these songs knowing they weren't Pierces songs, and I collected them in anticipation of the day when I could record them myself," says Pierce.  "I'd envisioned the whole thing, so I was ready, and waiting patiently for the opportunity to make it."

"It was intense," Allison says of the experience, "because Ethan is trying to capture something that's really intimate, and the more vulnerable, the better. Sometimes I'd feel like a take wasn't my best musical performance, but Ethan would say, "No, no, no, this is the magic.' He hears something that's special, something that would appeal to the emotions of the listener."

As for the album title?  In Chinese astrology, rabbit is the symbol for hope.  For Pierce, it also means transformation.  "The rabbit in Alice in Wonderland was what took her from her mundane world into the spiritual and mystical realm, where she was transformed."

Tour Dates (Opening for The Wind And The Wave)