getTV Spices Up Daytime Lineup, Adds A Dash Of Southern Charm And Humor With The Groundbreaking Sitcom "DESIGNING WOMEN" For Its 30th Anniversary Beginning Monday, June 26 At 11 a.m. ET

The Network Has Acquired 5 Seasons of the Beloved Series; Will Launch with Special Evening Countdown Event Featuring 30 All-Time Favorite Episodes Week of June 19

"DOC," "CRAZY LIKE A FOX," and "ONE WEST WAIKIKI" Will Also Make Their getTV Debuts June 26 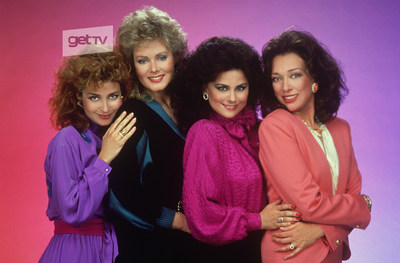 "DESIGNING WOMEN" stars Dixie Carter as the outspoken and independent Julia Sugarbaker, the head of a successful Atlanta-based design firm who runs her company with her former beauty pageant-winning sister Suzanne (Delta Burke), along with the pragmatic head designer Mary Jo (Annie Potts), and the sweet-natured naïve office manager Charlene (Jean Smart). Together, they deal with the trials of work, love, and each other, with the help of scene-stealing delivery man Anthony (Meshach Taylor). Notable guests include Dolly Parton, Scott Bakula, Gerald McRaney, Hal Holbrook and Tony Goldwyn.

Throughout its run, the show was celebrated for its portrayal of strong female characters, bolstered by Julia's progressive views and stunning monologues which quickly became one of the series' signature features. Though known for its undeniable Southern charm, "DESIGNING WOMEN" was unafraid to address a variety of serious topics such as homophobia, racism, and domestic violence, and earned a total of 18 EMMY® nominations, including three for Outstanding Comedy Series, two for Burke for Outstanding Lead Actress in a Comedy Series and one for Taylor for Outstanding Supporting Actor in a Comedy Series.  Ironically, the only EMMY® win for the pioneering series was for Outstanding Achievement in Hairstyling.

"Groundbreaking by all accounts, "DESIGNING WOMEN" is a watershed sitcom in television history," said Jeff Meier, SVP of Programming, getTV. "With its superb ensemble cast, it expertly captured the saucy boldness of Southern women with timeless humor, sharp dialogue and endearing characters. getTV is excited to bring this series back to broadcast television for its legions of fans to reconnect with, and for a new generation to discover and enjoy."

Also premiering on getTV June 26 are three popular hour-long series: the family medical drama "DOC," at 9 AM ET, starring Billy Ray Cyrus as a Montana country doctor who relocates to Manhattan; the comedy-mystery "CRAZY LIKE A FOX," at 10AM ET (Mon-Thurs), starring Jack Warden as a private eye who solves crimes with his lawyer son, played by John Rubenstein; and the crime drama "ONE WEST WAIKIKI," at 1PM ET, starring Cheryl Ladd as a respected medical examiner who frequently clashes with her detective co-worker (Richard Burgi).

For a complete schedule, visit www.get.tv/schedule.