Check out props from Spider-Man: Homecoming and Experience What it's Like to Fly Through the Streets of Queens, NY

NEW YORK, June 26, 2017 /PRNewswire/ -- Calling all Spider-Man fans!  Whether you are a die-hard fan or a family looking for a free way to entertain your aspiring superheroes, stop by Sony Square NYC and be surrounded by all things Spider-Man. 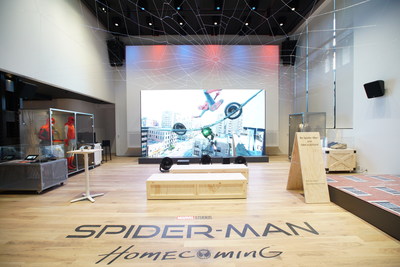 In anticipation of the July 7th U.S. theatrical release of Columbia Pictures' "Spider-Man: Homecoming," Sony Square NYC is providing an experience worthy of a standing ovation.  Visitors to the showroom will get the chance to step into Peter Parker's shoes (and leap off a crane to swing through the air in pursuit of Spider-Man's nemesis The Vulture) in the Spider-Man: Homecoming VR experience on PlayStation®VR.  Visitors will also be able to catch an exclusive viewing experience that creates the feeling of flying through the streets of Queens, New York, just like Spidey.  Plus, props from the film will be on display, including a Spider-Man costume and Peter Parker's backpack.

Each visitor will also get to leave the exhibit with a keepsake – a photo of themselves flying high above the skyline – just like Spider-Man!

"'Spider-Man: Homecoming' is a movie that will thrill the senses, and it was our goal to give fans the opportunity to experience that excitement before the film opens on July 7," said Steven Fuld, Senior Vice President, Corporate Marketing, Sony Corporation of America.  "This Spider-Man exhibit is exclusive to Sony Square NYC – it cannot be experienced anywhere else in the world."

"The Spider-Man: Homecoming" experience is on display from June 26 – August 6.

About Spider-Man: Homecoming
In "Spider-Man: Homecoming," a young Peter Parker/Spider-Man (Tom Holland), who made his sensational debut in Captain America: Civil War, begins to navigate his newfound identity as the web-slinging super hero in "Spider-Man: Homecoming." Thrilled by his experience with the Avengers, Peter returns home, where he lives with his Aunt May (Marisa Tomei), under the watchful eye of his new mentor Tony Stark (Robert Downey, Jr.). Peter tries to fall back into his normal daily routine – distracted by thoughts of proving himself to be more than just your friendly neighborhood Spider-Man – but when the Vulture (Michael Keaton) emerges as a new villain, everything that Peter holds most important will be threatened.  The movie opens in the U.S. on July 7th.