NEW YORK, Aug. 18, 2017 /PRNewswire/ -- The Original Cast Recording of SpongeBob SquarePants – The New Musical will be released September 22 by Masterworks Broadway.  Available for preorder now, the album features a score of original songs unlike anything Broadway has ever heard and is produced by Scott Riesett and Tom Kitt, with executive producers Scott Farthing, Doug Cohn and Susan Vargo. A special two-LP vinyl version of the recording will be released November 3, in anticipation of the show's Broadway performances which begin November 6 at the Palace Theater in New York City. 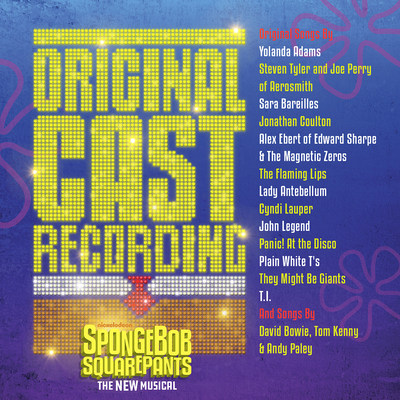 A visionary director and a Tony Award®-winning design team bring one of the world's most beloved and unforgettable characters to Broadway in SpongeBob SquarePants, with a legendary roster of Grammy Award-winning songwriters coming together to give the musical its distinctive voice.

"Our musical is about community – and the diverse, colorful individuals who come to cherish and fight for it. So this album represents a diverse community of songwriters, each singular in his or her own writing voice – yet all a part of the kooky, kaleidoscopic world we call Bikini Bottom," says Tina Landau, who conceived and directs SpongeBob SquarePants.

To write the songs that give an irrepressible and eclectic voice to the world and the story of SpongeBob SquarePants, the production reached out to leading songwriters in the rock and pop worlds. The composer/lyricists include Yolanda Adams, Steven Tyler and Joe Perry of Aerosmith, Sara Bareilles, Jonathan Coulton, Alex Ebert of Edward Sharpe & The Magnetic Zeros, The Flaming Lips, Lady Antebellum, Cyndi Lauper, John Legend, Panic! At the Disco, Plain White T's, They Might Be Giants, and T.I., and songs by David Bowie, Tom Kenny & Andy Paley, with additional lyrics by Jonathan Coulton and additional music by Tom Kitt.

Kitt arranged and orchestrated all the songs in a way that serves the specific needs of the show, while spotlighting the distinctive voices of each songwriter.

"I cannot say enough about the care and creativity each one of them brought to their compositions," he says. "Every song brilliantly encapsulates the moment they were asked to write for. And all of these songs are beautifully crafted with melodic hooks that I challenge anyone to jettison from their brains after the first listen."

Conceived and directed by Tina Landau – with orchestrations, arrangements and music supervision by Pulitzer Prize-winning composer Tom Kitt – SpongeBob SquarePants has an original book by Kyle Jarrow, with choreography by Christopher Gattelli. The cast is headed by Ethan Slater as SpongeBob SquarePants, Gavin Lee as Squidward, Lilli Cooper as Sandy Cheeks and Danny Skinner as Patrick.

Stakes are higher than ever before as SpongeBob and all of Bikini Bottom face the total annihilation of their undersea world. Chaos erupts. Lives hang in the balance. And just when all hope seems lost, a most unexpected hero rises up and takes center stage.

SpongeBob SquarePants – The New Musical is produced by Nickelodeon with Sony Music Masterworks, The Araca Group and Kelp on the Road.

Since premiering on Nickelodeon in July 1999, SpongeBob SquarePants has emerged as a pop culture phenomenon.  The series has been the most-watched animated program with kids for more than 13 consecutive years, and over the past several years, it has averaged more than 1 million total viewers every quarter across all Nickelodeon networks.  As the most widely distributed property in Viacom history, SpongeBob is seen in over 185 countries and translated in more than 50 languages. The character-driven cartoon chronicles the nautical and sometimes nonsensical adventures of SpongeBob, an incurably optimist and earnest sea sponge, and his undersea friends.