NEW YORK, May 11, 2018 /PRNewswire/ -- The official Deadpool 2 (Original Motion Picture Score) is now available everywhere digitally to stream / download. Fans can now hear the first-ever "parental guidance" tagged score album from award-winning composer, Tyler Bates (John Wick, Guardians of the Galaxy, Watchmen) and look forward to explicit numbers such as "Holy S*** Balls" and "Make the Whole World our B****."  Billboard says "the score…matches the smart-ass spirit of the franchise." Stream or download the album now ahead of the film's release on May 18, 2018. 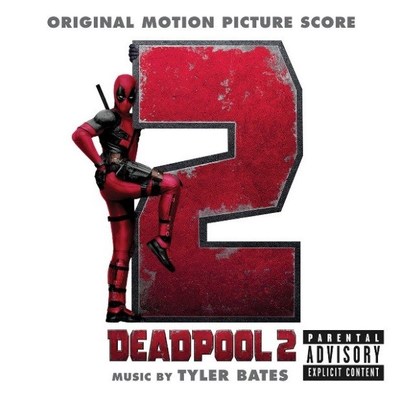 ABOUT DEADPOOL 2:
After surviving a near-fatal bovine attack, a disfigured cafeteria chef (Wade Wilson) struggles to fulfill his dream of becoming Mayberry's hottest bartender while also learning to cope with his lost sense of taste. Searching to regain his spice for life, as well as a flux capacitor, Wade must battle ninjas, the yakuza, and a pack of sexually aggressive canines, as he journeys around the world to discover the importance of family, friendship, and flavor – finding a new taste for adventure and earning the coveted coffee mug title of World's Best Lover.

ABOUT TYLER BATES:
With an innate understanding of an environment's power, perhaps it's no coincidence that Tyler Bates has become not only an artisan at architecting music for film, television, and video games, but an in-demand multi-instrumentalist, writer, and producer. Through the nineties, he logged 1,200-plus live shows in his bands, including Pet, released on Igloo/Atlantic Records, under the guidance of Tori Amos, before segueing into the world of film score. He started to make waves by creating the audio backdrop for the popular Zack Snyder Dawn of the Dead reboot in 2004 followed by his soundtrack for the filmmaker's 300.

By 2017, he worked on the most successful franchises in recent memory: Marvel's Guardians of the Galaxy and John Wick. In addition to composing for Guardians of the Galaxy Vol. 1 & Vol. 2 and winning a BMI Film Music Award for the first, he co-wrote and produced a fan favorite "disco version" of "Guardians Inferno" [feat. David Hasselhoff], performed the second installment's score at the 2017 MOSMA Festival in Spain, and crafted the music for the Disney California Adventure attraction Guardians of the Galaxy – Mission Breakout!

Meanwhile, John Wick: Chapter 2 represents the nexus of his work as a composer, performer, and songwriter. He penned the closing credits tune "A Job To Do" alongside legendary Alice In Chains guitarist and vocalist Jerry Cantrell and performed on-screen during the climactic "Rock Opera" sequence, rocking a guitar-viol on stage with Le Castle Vania and Nostalghia. Samurai Jack offered a similar experience. After overseeing score production for Samurai Jack with composers, Joanne Higginbottom and Dieter Hartmann, he took the stage to perform a suite of the score at a sold-out Ace Theatre concert.

Samurai Jack just one of his many TV credits. His sonic presence can also be felt throughout Netflix's The Punisher, Showtime's Californication, Audience Network's Kingdom, WGN America's Salem, and more as well as video games such as Killzone: Shadow Fall, God of War: Ascension, Army of Two: The 40th Day, and most recently Crossfire.

2014 saw the birth of a powerful partnership with Marilyn Manson, touring the world. After meeting on a Californication performance, Bates went on to co-write and produce the 2015 epic, The Pale Emperor and the follow up in 2017, Heaven Upside Down. A runaway worldwide success, it achieved the Top 10 of the Billboard Top 200 at #6 and earned widespread critical acclaim with Rolling Stone hailing it as the "#1 Metal Album of 2015."

Bates handled music for the blockbuster Atomic Blonde starring Academy Award® winner Charlize Theron. For the project, he also produced Health's cover of "Blue Monday" and re-invigorated and revitalized Ministry's "Stigmata" with Manson for key sequences in the film. On the big screen, he can be heard in the critically acclaimed The Belko Experiment as well as Public and 24 Hours to Live, while his voice permeates NETFLIX's The Punisher and Season 2 of The Exorcist.

CLICK TO TWEET
"Holy S***, balls! RT if you're ready for the new @deadpoolmovie out 5/18!? Well if not, #deadpool2 soundtrack scored by @tyler_batesis out today @SonyMasterworks so 'You Can't Stop This Mother F*****" anyway! Listen here for all the #Deadpool music hype: https://Soundtracks.lnk.to/Deadpool2ScoreMW"