-- Sony Electronics and Netflix Unveil Netflix Calibrated Mode for Sony MASTER Series Televisions: an Innovation that Responds to Consumers' Desire to Experience Viewing as Intended by the Filmmaker -- 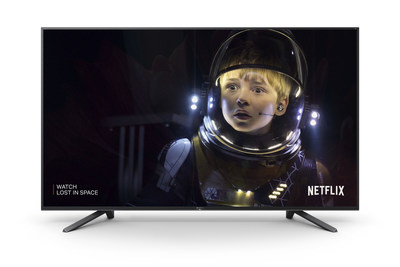 "In recent years, we have seen great advances in technology that have made an unprecedented impact on the way TV and film entertainment is consumed," said Mike Fasulo, president and chief operating officer of Sony Electronics North America. "Both Sony and Netflix have been pioneering the industry in terms of content production and distribution, working directly with creators to bring their stories to entertainment lovers around the world. Sony and Netflix have put much effort into developing and supporting cutting-edge technologies, such as 4K picture resolution, high dynamic range (HDR) and Dolby Atmos™ sound that allow film professionals to authentically express their vision for fans to enjoy in their homes around the world."

"While recently watching 'Lost in Space,' I was struck by the vivid landscapes: lush forests, shadowed snowfields, and other visual elements that pulled me more deeply into the Robinsons' adventures," said Scott Mirer, vice president, device partner ecosystem, Netflix. "We can't wait for our members around the world watching on Sony's new MASTER Series TVs to get this fantastic experience and — for the very first time — to deliver studio-quality picture mastering to the living room with Netflix Calibrated Mode."

Sony MASTER Series is comprised of two new televisions – the A9F OLED TV and the Z9F LED TV. Drawing on Sony's half-century of TV engineering expertise, the MASTER Series delivers Sony's highest quality picture possible in a home setting. It comes with a variety of smart features and is the only series of TVs that offers Netflix Calibrated Mode.

Pricing and Availability
The MASTER Series A9F and Z9F will be available across North America in the fall of 2018, with pricing and retail availability to be announced later.

About Sony Electronics Inc.
Sony Electronics is a subsidiary of Sony Corporation of America and an affiliate of Sony Corporation (Japan), one of the most comprehensive entertainment companies in the world, with a portfolio that encompasses electronics, music, motion pictures, mobile, gaming and financial services. Headquartered in San Diego, California, Sony Electronics is a leader in electronics for the consumer and professional markets. Operations include research and development, engineering, sales, marketing, distribution and customer service. Sony Electronics creates products that innovate and inspire generations, such as the award-winning Alpha Interchangeable Lens Cameras and revolutionary high-resolution audio products. Sony is also a leading manufacturer of end-to-end solutions from 4K professional broadcast and A/V equipment to industry leading 4K Ultra HD TVs. Visit http://www.sony.com/news for more information.