Rocro, one of the latest companies to come out from Sony, has its roots in Sony's software development group. The company was established as a solely owned subsidiary of Sony Network Communications, and it aims to make publicly available the solutions initially developed for Sony's internal cloud infrastructure.

The public beta versions of Inspecode and Docstand and the closed beta version of Loadroid were first made available on September 14th, 2017. Since then, Rocro managed to acquire more than 1700 users from all over the world, from Japan to the United States and India.

To make sure software developers get the most out of our products, we decided to employ a per core pricing structure. Rocro's monthly subscription starts at $50 US dollars per core. For more details, please have a look below: 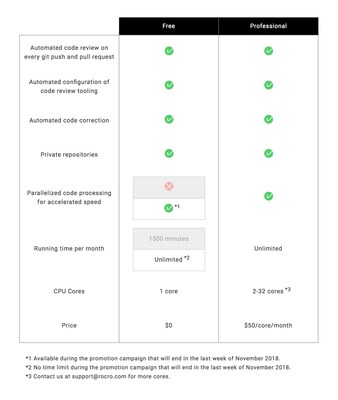 We believe that a per core pricing structure is more efficient than a per seat one. With our pricing structure, regardless of the number of users, the monthly price you'll have to pay will depend only on the maximum number of CPU cores your development team will use for Inspecode / Docstand.

Inspecode and Docstand are engineered to provide breathtaking levels of speedup by executing the processing tasks in parallel. Combined with our fee structure described above, this allows our customers to control the amount of processing power available for each team of developers, and, most importantly, save money. For more details, please refer to our blog post on how to optimize resource allocation.

We are happy to announce that, to celebrate the official launch, all our customers will enjoy unlimited execution time with "Free plan" until the end of November 2018.

Rocro Inc., a 100% owned subsidiary of Sony Network Communications, was established to help software developers around the world focus on the essentials. The company provides an array of services that increase the level of automation for day to day activities, simplify development tasks, and parallelize them.