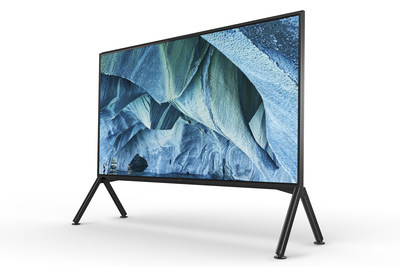 Sony Corporation President & CEO Kenichiro Yoshida spoke at the Sony press conference held on Monday, January 7(local time), stating that "Sony is a Creative Entertainment Company. We at Sony partner with content creators who make the music, the movies, the television shows and the games that engage billions of eyes and ears and minds around the world. We'd like to showcase how Sony's professional grade technologies support creators across the entertainment industries to produce compelling content. You will also see how our consumer products connect creators and users by enabling people to enjoy content at the highest possible quality."

He also introduced that "Communities of Interest," communities of people who share similar interests, emotional values and experiences, are formed around our world-class entertainment content and hardware products such as PlayStation® and α™ interchangeable-lens digital cameras. He closed by asserting that "with our technology, Sony is also there to deliver the very best entertainment experience to the fans and fill the world with emotions."

Next to take the stage were Tom Rothman (Chairman, Motion Pictures Group, Sony Pictures Entertainment (SPE)) and Kristine Belson (President, Sony Pictures Animation, SPE). They spoke about how strong entertainment content and lasting IP are as crucial to fulfilling Sony's vision as outstanding technology. They went on to describe how Sony's technology and products help turn creators' vision into reality. They then introduced examples such as Sony's CineAlta Camera VENICE and α9 full-frame mirrorless camera that were used in the creation of TV shows and films. They also highlighted Sony's new TV lineup, including the BRAVIA® MASTER Series that adapts the creators' artistic intent and delivers content to users.

Additionally, Rob Stringer (CEO, Sony Music Entertainment) took the stage and pointed to the "Lost In Music" brand campaign as an example of combining music and Sony's latest technology. He then introduced that Sony will deliver new music experiences to music fans with 360 (THREE SIXTY) Reality Audio.

A video of the press conference can be streamed at the following website.
https://livestream.com/Sony/CES

Main Products and Prototypes Being Showcased
The Sony booth consists of several zones such as "Visual Entertainment," "Music Entertainment" "α" and "PlayStation." Each zone introduces Sony's efforts and products that connect creators and users through the latest hardware and technology, and deliver the ultimate entertainment experience to customers.

A stage has been set up in the center of the Sony booth. There, special talk show sessions and video screenings held several times per day will highlight the artistic intent of various content creators (including a Grammy Award-winning sound engineer, professional photographers, etc.). These shows will cover examples of creators' content made using Sony's latest products and their thoughts on the creative process.

Click the link below for more information about the Sony booth and stage show schedule.
https://www.sony.net/brand/event/ces2019

The new flagship 4K OLED BRAVIA MASTER Series A9G (77"/65"/55") are approximately half1 the thickness of previous models when wall-mounted, seamlessly blending into any space. In addition to X1 Ultimate, it features unique Pixel Contrast Booster™ panel control technology, which faithfully reproduces everything from the deepest blacks to the highest luminosity colors with stunning vibrancy. Alongside Acoustic Surface™ Audio+ technology that produces sound from the screen itself harmonizing the image and audio for a cohesive and immersive high-quality surround-sound experience and Center Speaker Mode2, it is also compatible3 with Dolby Atmos®, the latest audio format.

These TVs feature Netflix Calibrated Mode, which lets you enjoy a wide variety of entertainment from Netflix exactly the way the creators intended. Additionally, these TVs are part of the IMAX® Enhanced certification program that is the result of collaboration between Sony's engineers together with IMAX, DTS® and content creators to faithfully deliver creators' vision and intent.

1: Distance from front of the screen to the wall as compared to A9F Series when combined with compatible wall-mount unit.
2: Must be combined with existing home theater system.
3: Requires network update. Update scheduled for within 2019.

Music Entertainment
With the theme of co-creation between artists and Sony's technology, Sony introduces 360 Reality Audio, a new music experience which creates "sound fields" that make listeners feel as if they are immersed in sound from all directions. This new experience will bring users new ways to enjoy music, adding to the "rich sound quality" realized by High Resolution Audio (Hi-Res) and "superb audio functionality" as seen in our highly-acclaimed noise canceling.

360 Reality Audio is made possible through object-based spatial audio technology. It can add distance, angle, and other positional information to a sound source such as vocals, chorus, instruments, etc. to produce a three-dimensional sound field where the different sounds and musical elements can be projected from anywhere inside a 360-degree space around the listener. This creates a rich and immersive music experience that feels just like being at a live concert. Compatible content will be produced4 in collaboration with major music labels and is expected to be made available through music distribution services5.

The booth also features a multi-speaker system composed of 13 speakers and a demo6 using MDR-Z7M2 headphones. A prototype display for a speaker system which delivers a 360 Reality Audio experience will also be on showcase.

α
Responding to the artistic intent of photographers and film creators, Sony shows off the α9 and α7 series full-frame mirrorless camera, which allows for new imaging expressions, and a full array of custom designed mirrorless lenses including G Master™, along with professional photographic artwork.

Additionally, with just one mount (E-mount), you can cover a diverse array of still and video cameras, and Sony is also expanding its product lines that can leverage a rich spectrum of custom designed lenses. On display are the α interchangeable-lens digital camera (compatible with E-mount lenses that support full-frame and APS-C size image sensors), XDCAM™ memory camcorder, and a professional cinematic camera, CineAlta VENICE.

Sony aims to further refine the capabilities and features of its mirrorless camera's five fundamentals (Lens, Image Quality, Speed, Battery Life, Compact & Lightweight). In the booth, we have set up various demo corners where visitors can experience all five of these fundamentals for themselves and enjoy a unique experience only available through α, which includes features that support professionals such as high speed, high resolution, high-performance AF and Eye AF functionality. Furthermore, visitors can photograph and film dances and performances at the special studio in the booth.

PlayStation
PlayStation, Sony's largest "Community of Interest", continues to build on the strength of PlayStation®4 (PS4™), which recently broke 91.6 million8 units in worldwide sell-through, and PlayStation™Network, which features over 90 million9 monthly active users globally. In the booth, visitors can play PS4 and virtual reality (VR) titles such as the action game Astro Bot: Rescue Mission on PlayStation®VR, the VR system that enriches the gaming experience and further enhances the appeal of the PS4 platform.

In addition, visitors can go head-to-head on the two demo setups of Gran Turismo Sport available at the booth and enjoy promotional videos for PlayStation titles on a 16' wide and 9' tall Crystal LED display system, which delivers a stunning 4K HDR big-screen experience.

Accompanying the above, the Sony booth will also feature a concept video of future autonomous driving achieved through Sony's automotive image sensors, as well as the entertainment robot "aibo," which launched in the U.S. in September 2018.

* All product names mentioned here are trademarks or registered trademarks of Sony Corporation or of their respective owners.