NEW YORK, Jan. 8, 2019 /PRNewswire/ -- Sony Classical is pleased to announce the release of the recording of one of the world's most famous classical music events: the 2019 New Year's Concert with the Vienna Philharmonic under the direction of renowned conductor Christian Thielemann. The live recording is available now digitally and on CD. The DVD and Blu-ray will be available March 1, 2019. 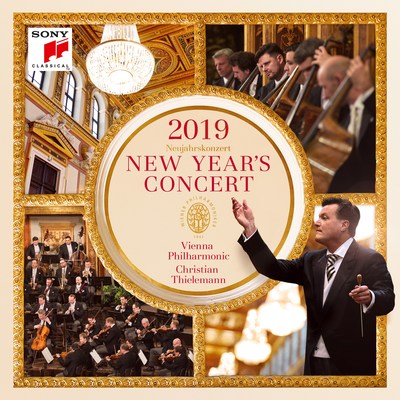 There are few concerts in the world that are awaited with as much excitement as the New Year's Concert from Vienna. Under the baton of the world's leading conductors, the Vienna Philharmonic ushers in the New Year with a concert in the magnificent Golden Hall of the Vienna Musikverein. The concert is relayed to over ninety countries all round the world, reaching an audience of more than fifty million.

The 2019 New Year's Concert will be conducted for the first time by Christian Thielemann. A native of Berlin, Thielemann has been a regular and welcome guest of the Vienna Philharmonic since 2000, with the result that his first New Year's Concert may be seen as setting an example and providing an appropriate tribute to his previous work with the orchestra. According to the orchestra's chairman, Daniel Froschauer, orchestra and musicians trust each other completely: "The profound musical understanding and trust that have existed from the outset and that have always functioned perfectly have subsequently borne remarkable fruit in the symphonic repertory as well."

Among the milestones in his partnership with the Vienna Philharmonic, pride of place must go to a cycle of Beethoven's nine symphonies. Conductor and orchestra worked on this project – Beethoven 9 – over a period of eighteen months before it was made available to an international public on DVD and Blu-ray in November 2010. The recordings were complemented by nine hour-long documentaries featuring Thielemann and Joachim Kaiser. Beethoven 9 was the first time that a Beethoven cycle had been released on Blu-ray.

The focus of Christian Thielemann's work as a conductor remains the Romantic symphonic repertory associated with composers such as Brahms and Bruckner, together with the music dramas of Wagner and Richard Strauss, but he has also repeatedly demonstrated his familiarity with light music of the highest quality. For the New Year's Eve Concert at the Dresden State Opera in 2017, for example, he conducted a programme of film music marking the centenary of the UFA production company. He has also enjoyed great success in the operettas of Franz Lehár, Emmerich Kálmán and others and has regularly been acclaimed for these performances by music critics the world over. "In operetta," the conductor observes, "one can learn the art of slight and tasteful shifts of tempo." It is important, he goes on, that these works "are performed with first-class forces". With his name as a guarantee of success, Thielemann first demonstrated to impressive effect that he is at home in the music of the Strauß family at the opening of the 2008 Philharmonic Ball.

Among the works that will be heard at the 2019 New Year's Concert is the Transactions Waltz by Josef Strauß. Its title could serve as a motto for the 150th anniversary of the start of diplomatic relations between Austria and Japan. Since 1987 the New Year's Concert has been shown live on Japanese television. Among the works by Johann Strauß that Christian Thielemann is conducting are his Express Polka, his waltz Pictures of the North Sea, excerpts from his only fully-fledged opera, Knight Pázmán, and the overture to The Gypsy Baron. In addition to works by other members of the Strauß family, the concert also features music by Josef Hellmesberger (ii) and Carl Michael Ziehrer.

The story of the Vienna Philharmonic Orchestra can be traced back to 1842, when Otto Nicolai conducted a "grand concert" with "all the members of the Orchestra of the Imperial and Royal Court Opera Theatre". This event is generally regarded as marking the birth of the orchestra. Ever since it was founded, the orchestra has been run by a democratically elected committee and is artistically, organisationally and financially independent. In the twentieth century its artistic profile has been shaped by such leading musicians as Richard Strauss, Arturo Toscanini, Wilhelm Furtwängler and, after 1945, by three emeritus conductors, Karl Böhm, Herbert von Karajan and Leonard Bernstein. Since it was formed, the orchestra has given around 9,000 concerts in every part of the world. Since 1989 it has presented a Vienna Philharmonic Week in New York. A similar series of concerts has been held in Tokyo since 1993.