GROUP REVEALS MUSIC VIDEO FOR ALBUM TRACK "SOMEONE TO YOU," NEW INTERPRETATION OF THE BANNERS' HIT

NEW YORK, Nov. 20, 2020 /PRNewswire/ -- Celebrating a decade together as a group known for their chart-topping music, unforgettable original visuals, and sold-out tours worldwide, THE PIANO GUYS today unveil their tenth album and brand new full-length, 10—available now from Sony Music Masterworks.  The album arrives alongside a new music video for the album's latest single "Someone To You" filmed at the Natural History Museum of Utah in Salt Lake City.  A fitting nod to their Utah origins, the setting offers the perfect backdrop to bring their rendition of the BANNERS hit to life with its rich reverence for history and breathtaking scenery.  The video features the band playing outside, in the main hall, and, of course, under the shadow of dinosaurs, with their performance footage artfully intercut with unbelievable aerial drone footage – watch here.  In celebration of today's album release, The Piano Guys will join fans live from their studios in Sandy, Utah today at 3:00pm ET for an album launch livestream party, chatting with fans across socials about their anniversary and new album – fans can join the livestream party HERE or watch on the group's official Facebook, Twitter and Instagram.

Of the new video, The Piano Guys' Steven Sharp Nelson says, "'Someone to You' literally takes our music videos to another level. In addition to a fast paced, syncopated musical setting, we partnered with a world-class speed drone pilot to film never before attempted shots. The music and video in an abstract aesthetic way, attempt to take on the complicated nature of the current COVID crisis by showcasing public places that are normally bustling with activity, but are now mostly silent due to the pandemic. We hope the message is about the opportunity we all have to draw upon our past indomitable resilience as a human family to make our future fly even higher."

Available everywhere now, The Piano Guys' 10 nods to the past as it paves a path for the future. The 2-disc album reflects on The Piano Guys' greatest career moments thus far with 15 newly-remastered fan favorite tracks from the past decade as well as introduces their next chapter with 7 brand new songs and 6 tracks never-before-released on CD.  The group introduced 10 with the release of "You Say," uniting Lauren Daigle's chart-topping smash "You Say" with classic Beethoven to create a rich mosaic of strings and piano.  The track was released alongside a gorgeous music video featuring iconic scenery from their home state of Utah, which has since amassed 1.6 million YouTube views in less than two months – watch here.

The Piano Guys followed up "You Say" by infusing a fresh fire into "Für Elise Jam," pairing the rock 'n' roll-tinged improvisation of the Beethoven classic with their first-ever foray in AI for the track's video.  Partnering with virtual reality company Massive Technologies and their app AR Pianist for a hyper-realistic performance visual featuring a 3D avatar of The Piano Guys' Jon Schmidt performing alongside a real-life Steven Sharp Nelson – watch here.  Of the track, Steven says, "It was an improvisation Jon and I would do back in the day. We'd play around with 'Für Elise.' At his concerts, he often started with a classical entrance. All of a sudden, he'd throw some rock and jazz onto it, turning the piece on its head. It's moments like this that really gave birth to The Piano Guys."

Over the course of the past decade, The Piano Guys have reached a series of unprecedented milestones on an unbelievable journey around the globe. Among countless memories, the gold-selling Utah quartet—Jon Schmidt [pianist, songwriter], Steven Sharp Nelson [cellist, songwriter], Paul Anderson [producer, videographer], and Al van der Beek [music producer, songwriter]—could cite gravity-defying performances on a speeding train, playing under the shadows of international wonders a la The Great Wall of China, or gracing world-famous stages such as Carnegie Hall, Red Rocks Amphitheatre, Sydney Opera House, and beyond.  Now, the group's new full-length album, 10 [Sony Music Masterworks], reflects on these moments with a collection of 15 fan favorites as it also looks ahead with  7 brand new songs and 6 tracks never-before-released on CD.

"I remember playing cello on the edge of a rocky oceanside cliff with the waves splashing up, and all I could think was, 'Man, am I glad my dad made me practice'," Steven laughs. "When you hit double digits on anything, it makes you do a double take and causes introspection. We're in a mood of real gratitude. There have been highs, lows, and extreme times. If you take the running average, it's been quite a ride. We've been rolling down the hill, bumping into things, and rubbing off our edges. Today, we're more invested emotionally and spiritually in what we're trying to accomplish. That's why this album is so important to us. There were extraordinary moments, but there have also been moments alone in a practice room where I just thought, 'Wow, I can't believe music has made me into who I'm trying to be'. If you work hard enough at an instrument, you'll inevitably be able to close your eyes, start playing, and feel like you're flying. In essence, that really is the story of The Piano Guys."

The collective of friends and collaborators turned the first page of the story in 2011. The musicians initially captivated listeners everywhere on YouTube before visiting dozens of countries on tour. They built a catalog comprised of seven studio offerings, two Christmas albums, and a live record. Along the way, they gathered nearly 4 billion global audio streams, accumulated 2 billion-plus YouTube views, and achieved six #1 debuts on the Billboard Top Classical Albums Chart. In between sold out shows on five continents, the boys earned gold certifications for their self-titled album The Piano Guys and single "A Thousand Years." Additionally, they would be featured in The New York Times, Fast Company, BuzzFeed, Mashable, People and on CBS Sunday Morning in addition to performing on The TODAY Show, Good Morning America, and The Tonight Show.

"This is not a 'Greatest Hits' or 'Goodbye, Cruel World' album," assures Steven. "On the contrary, we joke that this was a 'Midlife Crescendo'.  It's very much about moving forward to the next level. We're just able to look down the mountain and say, 'Wow, this has been an amazing journey'. There's still a long way to go, but we're able to recognize we've come a long way. We feel like music is our life's calling. Thematically and transparently, we are getting back to the joy and passion of music on 10. It's the theme of the album."

Providing an overview of the group's catalog thus far, the bonus disc on 10 includes "A Thousand Years," "Fight Song/Amazing Grace," "Sky Full of Stars," and other staples. Heralding the new material, The Piano Guys introduce the first disc of the album with the single "You Say." Weaving Lauren Daigle's uplifting ballad with Beethoven's "Sonata Pathétique," the track upholds an important reminder in the process.

"We are all so entrenched in The Piano Guys' mantra, belief system, and purpose," he goes on. "We believe the worth of the soul is invaluable. 'You Say' proclaims, 'The world might say I'm dead, but you—as God—say I belong and I'm strong'. The message aligns perfectly with our core beliefs and values. It was fun to combine it with 'Sonata Pathétique,' which in my opinion, is one of the Top 10 classical pieces written. The message of 'You Say' and the new tunes represent us striving to return to our core purpose, why we do what we do, why we create what we create, why we write what we write, and why we play what we play. Our fundamental purpose is to spread hope and help people recognize the worth of their own souls."

In keeping with another tradition of The Piano Guys, they once again reimagine, re-envision, and reinvigorate the landscape of popular culture by translating pop gems such as Lewis Capaldi's "Someone You Loved," Rascal Flatts' "Bless The Broken Road," and Ed Sheeran's "Thinking Out Loud" into warm classically spun instrumental tapestries. Meanwhile, they entwine Selena Gomez's "Lose You To Love Me" with Frédéric Chopin's "Raindrop Prelude." "There's a catharsis to this one," observes Steven of "Lose You To Love Me," saying, "We slowed it down and made it meditative. There's a necessary darkness to contrast with the light as it shines through in measured moments. I also don't think anybody has ever tried to juxtapose Chopin with Selena Gomez before," he smiles.

Another original, "Better Days" amplifies a personal story with equally powerful vocal delivery by Al.  "It's a vocal tune Al primarily wrote," says Steven. "It's basically his struggle over the past six months through COVID-19 and everything. He just put his feelings on paper and sang his heart out."

In the end, The Piano Guys may be ten years older and wiser, but they cling to the same values and mission that brought them here ten years ago. "We hope 10 brings the spirit of joy and hope into the hearts of those who listen to it," Steven leaves off. "We hope there is ten years' worth of effort on our part injected to the point where it comes across authentically, and we hope, maybe, it does some good." 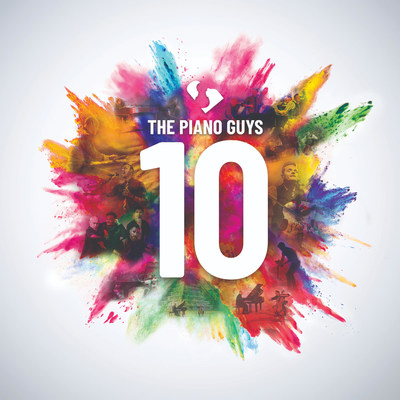