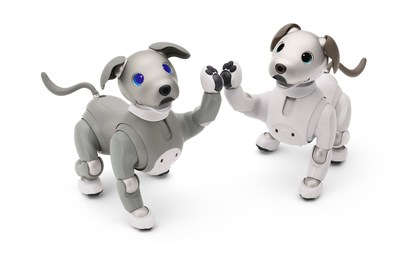 The three-year AI Cloud Plan lets aibo safely gather and access its daily life experiences, enabling it to develop a unique personality that grows and evolves. With careful attention to user privacy, aibo recognizes up to 100 faces and develops a familiarity with people over time, remembering which actions make owners happy. As each aibo is shaped by its daily interactions and the parenting style of its owners, the personality, behavior and knowledge of every new puppy companion is completely unique.

In addition to supporting aibo's AI-powered learning capabilities, the Cloud Plan ensures aibo will be kept current for years to come by growing aibo's functionality with new tricks, software-based features, and even entirely new behaviors.

aibo parents can also stay connected to their pup using the "My aibo" app2,3.The app provides an easy and handy interface that allows users to play with their pet, add new behavior and tricks to its repertoire and more.

In addition to the aibo Black Sesame Edition, Sony also announced the release of the aibo Food Bowl (aiboFB) and the aibo Water Bowl (aiboWB) available now for purchase in the U.S. on Sony's website, https://electronics.sony.com/more/c/aibo. With the My aibo App, aibo parents can feed their pet virtual meals or treats and watch aibo eat out of the bowl. Selecting the "AR" button in the app offers a fun interactive Augmented Reality experience for aibo parents to see their aibo eat its food, virtually. Learn more about feeding aibo at us.aibo.com/feature/food, and join the aibo community here.

Sony Electronics is a subsidiary of Sony Corporation of America and an affiliate of Sony Group Corporation, one of the most comprehensive entertainment companies in the world, with a portfolio that encompasses electronics, music, motion pictures, mobile, gaming, robotics and financial services. Headquartered in San Diego, California, Sony Electronics is a leader in electronics for the consumer and professional markets. Operations include research and development, engineering, sales, marketing, distribution and customer service. Sony Electronics creates products that innovate and inspire generations, such as the award-winning Alpha Interchangeable Lens Cameras and revolutionary high-resolution audio products. Sony is also a leading manufacturer of end-to-end solutions from 4K professional broadcast and A/V equipment to industry leading 4K and 8K Ultra HD TVs. Visit http://www.sony.com/news for more information.