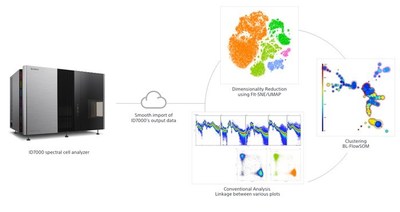 The SFA - Life Sciences Cloud Platform is a cloud-based solution that can efficiently perform a wide array of analysis protocols, ranging from conventional analysis including gating, in which only specific cell populations are selected for analysis and quantification based on differences in scattered light and flourescence signal intensity, to advanced analysis such as dimensionality reduction, which enables a two-dimensional view of multi-dimensional information, and clustering, which automatically classifies cell populations.

The solution is compatible with Sony's flagship ID7000™ spectral cell analyzerii that delivers streamlined multicolor cell analysis with more than 44 colorsiii. The raw data output and analysis results from the ID7000 software can be directly imported and analyzed without any conversion. In addition, this solution features BL-FlowSOMiv, a newly developed algorithm that speeds up FlowSOM, one of the clustering methods. Furthermore, because each algorithm is pre-installed in the cloud environment, immediate analysis is possible, and results from the data analysis can be managed and shared among users.

A flow cytometer is a powerful tool that analyzes cell characteristics by irradiating laser light onto cells stained with a fluorescent reagent that emits light under specific conditions, which then detects the emitted light as scattered light and fluorescent. This analysis method is called flow cytometry and can measure the size and number of a wide variety of cells, as well as information on the cell surface and interior content (such as structure, functions and biomarkers) very rapidly—analyzing tens of thousands of cells in under one second.

Flow cytometers are used in research fields such as immunology, oncology, and regenerative medicine for basic research, elucidation of disease causes, and drug development. As research advances, there is a growing need for instruments such as the ID7000, which can comprehensively acquire various cellular information in a single process. Analysis using algorithms, such as dimensionality reduction and clustering, has also been developed to quickly process the multicolor and extensive amount of cellular information obtained from such instruments.

"The SFA - Life Sciences Cloud Platform is Sony's first cloud service for life sciences, which was developed based on the needs of research sites and the knowledge gained from providing advanced flow cytometers such as the ID7000," said Taisuke Kawasaki, Senior General Manager, Life Science Division, Sony Corporation. "Through our solution, the data obtained from the ID7000 can be directly imported and efficiently used in both conventional analysis with a high degree of freedom, and for advanced analysis, which enables researchers to gain deeper insights easily and quickly by analyzing a large amount of data at high speed."

Formed in 2010 through the acquisition of iCyt Mission Technology, Sony's Life Sciences Business focuses on the research and development of regenerative medicine and immunotherapy. By utilizing Sony's proprietary laser optics, such as those used in Blu-ray disc and other optical discs, the Life Sciences business has developed flow cytometers and the ability to attach fluorescent dyes to cells. The Life Science Business will contribute to leading medical research and the production and development of cell therapies.

i SFA is a software name and an abbreviation of Spectral Flow Analysis.
ii Initially, this solution will be offered with a workstation.
iii Number may increase with introduction of new fluorochromes, particularly those excited by the 320nm laser.
iv BL stands for Batch Learning, a method of batch processing all the data to be trained. FlowSOM is a state-of-the-art clustering and visualization method that uses Self-organizing Maps (SOM) to analyze flow cytometry data.
v Subject to broadband connection speed. 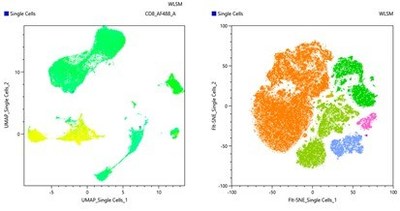