Released in 450 movie theatres in France, Central Tour in Cinema also screens in nine countries around the world

Filmed with 22 IMAX certified cameras through the "Filmed for IMAX" program, Central Tour in Cinema harnesses the same immersive technology used with films such as Dune, Doctor Strange & The Multiverse of Madness and Top Gun: Maverick 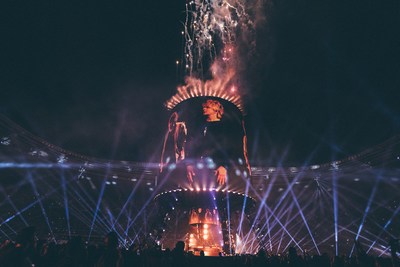 Sony Music France has supported Indochine since the band was first formed. Founded in 1981 Indochine quickly became a national and global success with songs like "L'aventurier" and "Canary Bay". Four decades on, and several generations of fans later, Indochine has sold 13 million of albums  worldwide, with plans for more collaborations to come.

Captured with 22 IMAX certified cameras, the launch of Central Tour in Cinema means Indochine are the first band ever to offer a concert filmed and broadcasted with IMAX technology and screened in cinemas in nine countries around the world. Thanks to the technology of IMAX certified digital cameras and state-of-the-art post-production work, the brightness, colorimetry and contrast are enhanced for unparalleled results of realism and precision on the big screen. The sound, powerful and vibrant, is customized for an optimal spread. The scale of the IMAX screens guarantees a total immersive experience that rivals the spectacular live show.

"We are very proud that the IMAX system has chosen us to be the firsts," said Nicola Sirkis, Founder of Indochine and KMS. "This system offers a full immersive experience, a way to be as close as possible to us in our show. The image quality is insane. We have literally never seen a concert filmed like that."

"Indochine are simply iconic in my eyes," said Marie-Anne Robert, Managing Director, Sony Music France. "They're the gold standard of innovation. They're constantly changing things up, stepping out of their comfort zone, and giving us things we've never seen before. And not only that: they're icons in the unconditional respect they have for their fans. All the teams here at Sony Music France are so proud to have Indochine on our roster, and we can't wait to help the band build new projects like this one."

"IMAX continues to be a global destination for fandom of all kinds, and Indochine is a perfect example of how we're creating unique and immersive entertainment events on the international stage," added Megan Colligan, President of IMAX Entertainment.